North Korean gymnast defects to the South ‘by leaping over border fence’: Seoul officials ‘then made him jump twice to prove he was telling the truth’

By Charlotte Mitchell For Mailonline

A North Korean man who defected to the South by reportedly leaping over the border fence has claimed to be a former gymnast.

On November 3, the man in his 20s entered the Demilitarised Zone (DMZ) between North and South Korea shortly after 7pm local time.

He was captured by South Korean border guards 14 hours later and his motivations for crossing have been under investigation ever since.

The military is making efforts to ascertain how the man could have crossed the three-metre fence without triggering an alarm.

Citing a ‘Seoul official familiar with the matter’, the Korea Herald reported that the man told authorities he had been able to jump the fence because of gymnastics training.

Officials then reportedly made the man – who was small in stature and light in weight – jump twice to prove his claim. 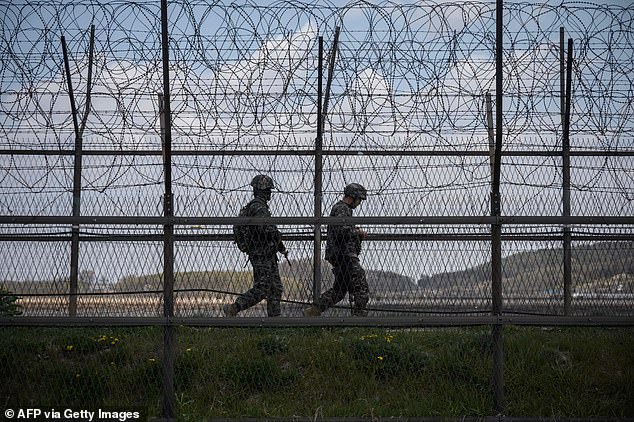 South Korean soldiers patrol along barbed wired fences in the DMZ in April. This month, a North Korean man has been arrested for crossing one such fence without triggering an alarm. The man claims to be a former gymnast and said he jumped over the fence, according to local media [File photo]

However, the Chosun Ilbo newspaper said authorities suspected that the man had  crossed by scaling an iron pole on the fence before jumping down the other side.

The military earlier revealed that the fences in the section where the North Korean man claimed to have crossed looked ‘pressed down’. It added that the barrier did not seem to have been cut or modified.

The man was arrested in Gangwon Province about 1.5km south of the border wearing blue civilian clothes, Chosun Ilbo reported. He had been wandering an area strewn with land mines and claimed to be a civilian seeking to defect.

The incident has sparked criticism from many who accuse the military of being slow to respond to potential North Korean infiltration.

Border guards had reportedly spotted the man crossing the barbed wire fence with a thermal observation device, however he was not arrested until many hours later.

Some say the man’s crossing has exposed flaws in South Korean military security, suggesting that the sensors which should have triggered an alarm when the man crossed had fallen into disrepair. 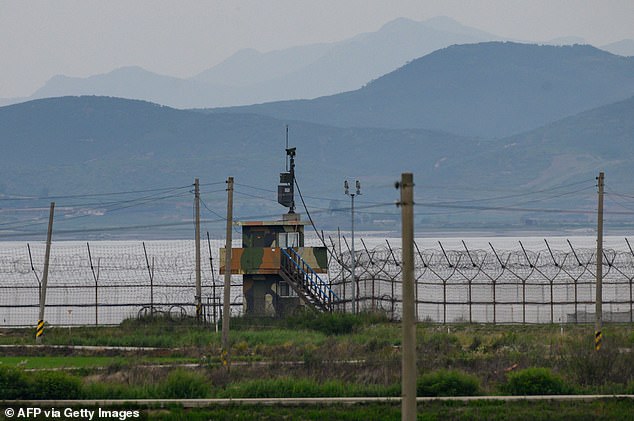 Other Korean media said authorities believed the defector likely scaled an iron pole on the fence then jumped down the iron side. Pictured: A South Korean guard post along the DMZ [File photo]

The incident comes within weeks of a South Korean fisheries ministry official being killed after crossing into North Korean waters. His body was reportedly burned by North Korean officials, prompting a rare acknowledgement by North Korean leader Kim Jong Un.

The former gymnast’s crossing is the second such security breach in the area after a North Korean soldier scaled three barbed wire fences in 2012 and only gained the attention of the South Korean military when after knocking on the door of an outpost.

The military later apologised for the incident, which came under the jurisdiction of the same unit investigating this month’s breach.

The conclusions of the internal investigation into the unit have not been made public.

Hundreds of North Koreans defect to the South each year, according to South Korea’s Ministry of Unification. Very few of the 31,000 who have fled do so via the DMZ, preferring instead to enter China then arrive in South Korea via a third country.

The majority are civilians although more than 700 members of the North Korean military have also defected since 1998, the ministry data showed.

Since the mid-2000s, the number of female defectors consistently dwarves men in each age group presented in official figures.