Let’s stand back for a moment from this awful pandemic and consider what has been done to us.

No previous governments in peacetime, and very few in wartime, have curtailed personal freedoms to the extent that ours have been suppressed over the past 11 months.

We can’t meet our nearest and dearest. We are obliged to stay at home unless we have a very good reason not to.

No previous governments in peacetime, and very few in wartime, have curtailed personal freedoms to the extent that ours have been suppressed over the past 11 months. Pictured: Boris Johnson runs with his dog Dilyn in Westminster

We are not allowed to go to pubs or restaurants, or to have our hair cut or visit the cinema.

We are unable to venture abroad or travel in our own country. Schools and universities have been closed.

Most of us have accepted these and other violations of our liberties as the price that must be paid to defeat Covid.

But we don’t want the Government ever to forget how enormous these unprecedented measures are.

The old Boris Johnson – the easy-going newspaper columnist who became Mayor of London – wouldn’t have forgotten.

He would have been appalled by this massive extension of state power, and done his utmost to reverse it at the earliest opportunity.

But the stern Boris Johnson on show in the Commons yesterday afternoon, and later at the No 10 press conference, didn’t demonstrate much regret at the painfully slow relaxation of a lockdown which, according to Oxford University’s Blavatnik School of Government, is the strictest in the developed world.

That optimistic, freedom-loving Boris has disappeared, and I wonder whether we will ever see him again.

The doleful characters who have finished him off are the unaccountable scientists of Sage, led by chief medical officer Professor Chris Whitty. The PM has been transported from boosterism to gloomsterism in a year. 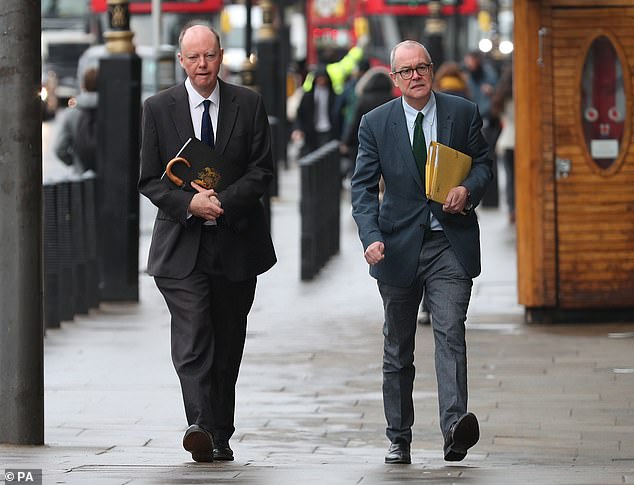 The doleful characters who have finished him off are the unaccountable scientists of Sage, led by chief medical officer Professor Chris Whitty (pictured left with chief scientific adviser Sir Patrick Vallance

Of course I realise how desperate he is to avoid a fourth lockdown. I can see that, having promised us the sunlit uplands prematurely before, he doesn’t want to repeat his error.

I know how horrified he has been by the recent high death toll. I suspect his own brush with death last April has made him hang back.

So I am not a crazy lockdown sceptic who thinks we can instantly get back to normality. Most of us understand the need for caution, and for feeling our way carefully towards resuming something like the life we once enjoyed.

But the roadmap for England unveiled by the Prime Minister yesterday was not merely excessively cautious and laborious. At its heart it contains a piece of dogma which is proof of blinkered and stubborn thinking. I am amazed Boris should have fallen for it.

The dogma is that however quickly infection and death rates fall, the country will be bound to follow the four five-week steps beginning on March 8.

Nothing can happen sooner than the scientists have ordained. But if they don’t like the look of the data, the steps could happen later.

What if Covid recedes over the coming weeks more quickly than scientists expect? A few of them have had the grace to say recently that they have been surprised by the speed of the fall in infection and death rates.

Well, the answer is that nothing will change if expectations are exceeded – the Prime Minister made that clear yesterday. England will proceed to unlock at the stately pace demanded by the epidemiologists, however fast rates fall.

An unknowable number of pubs, restaurants, and hotels – which can’t open indoors until May 17 at the earliest – will be forced to close for good even if the vaccination rollout drives down numbers. Look how quickly rates have fallen in recent weeks.

On January 20, there were 1,820 Covid reported deaths in the UK. Two days ago, and almost exactly a month later, there were 178. 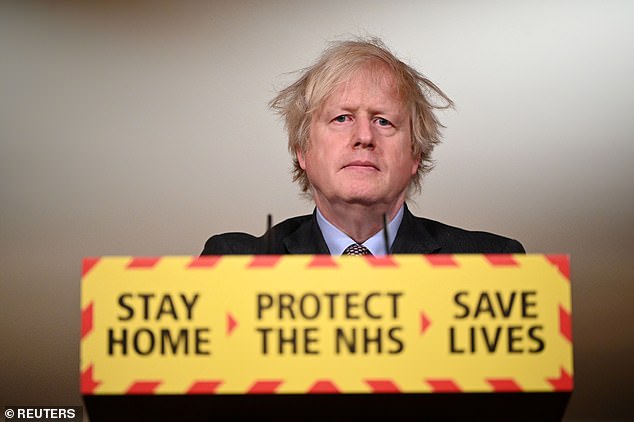 But the roadmap for England unveiled by the Prime Minister yesterday (pictured) was not merely excessively cautious and laborious. At its heart it contains a piece of dogma which is proof of blinkered and stubborn thinking

Admittedly, recorded numbers usually go down over the weekend, but the rapid decline is startling.

The consensus is that most of this rapid fall can be attributed to the effects of lockdown, with vaccinations becoming more of a factor in the past week or so as they become effective.

But with nearly 18million jabs already administered, and a daily rate of over 500,000 achievable, vaccinations are bound to play an increasingly important role in lowering numbers.

Indeed, a single dose of either the Pfizer or AstraZeneca jab reduces a person’s risk of developing Covid severely enough to need hospital treatment by between 85 and 94 per cent, according to a study by Public Health Scotland.

It’s a reasonable assumption that death and infection rates and hospital admissions will continue to decrease quickly, though some epidemiologists suggest that the return to school on March 8 (one bright point in this otherwise grim package) will slow down the decline.

Yet such is the rigidity of mind of Professor Whitty and Co that, however quickly numbers drop, it won’t make any difference.

We must proceed stage by pre-determined stage, regardless of the speed of the virus’s retreat. And if companies go bust in the meantime, and the nation goes mad, so be it.

More from Stephen Glover for the Daily Mail…

I’m surprised that someone as intelligent as Boris should have been taken in by such specious thinking.

He can surely work out the folly of cleaving to painful and damaging restrictions even if they are shown to be unnecessary.

Another thought: If people can see the unreasonableness of a policy, they may be reluctant to obey it.

Instructed by behavioural scientists, rather than relying on his diminishing common sense, Boris is confident that the majority will continue to be compliant. I wouldn’t bank on it in all circumstances.

For example, why should three vaccinated friends from different households have to wait until March 29 – five weeks away – before they are allowed to meet outside (where the chances of spreading the virus are anyway thought to be minimal)? This is where the arbitrary and irrational removal of our freedoms becomes intolerable.

Is it all hopeless? Are we destined to crawl at a snail’s pace towards some semblance of freedom as the economy stutters and Government borrows further billions of pounds, which our children and grandchildren will be required to pay back when Boris Johnson has long been forgotten? It certainly seems so.

Cabinet critics such as the Chancellor, Rishi Sunak, have apparently caved into Boris and the autocratic scientists.

There are some rebellious Tory MPs but not enough of them to make a difference with Labour backing the Government.

No, the next few months look bleak. My only hope is that Boris Johnson’s capacity for independent thought has not been totally snuffed out, and that if he sees Covid in rapid retreat he won’t insist on dragging out our return to a normal life.

All right-thinking people would applaud him for being flexible. I can’t pretend it’s a great hope on my part, but it is based on a memory of the old Boris, who championed freedom and never wanted to run with the herd.

Spotify has a major audio-quality upgrade coming later this year 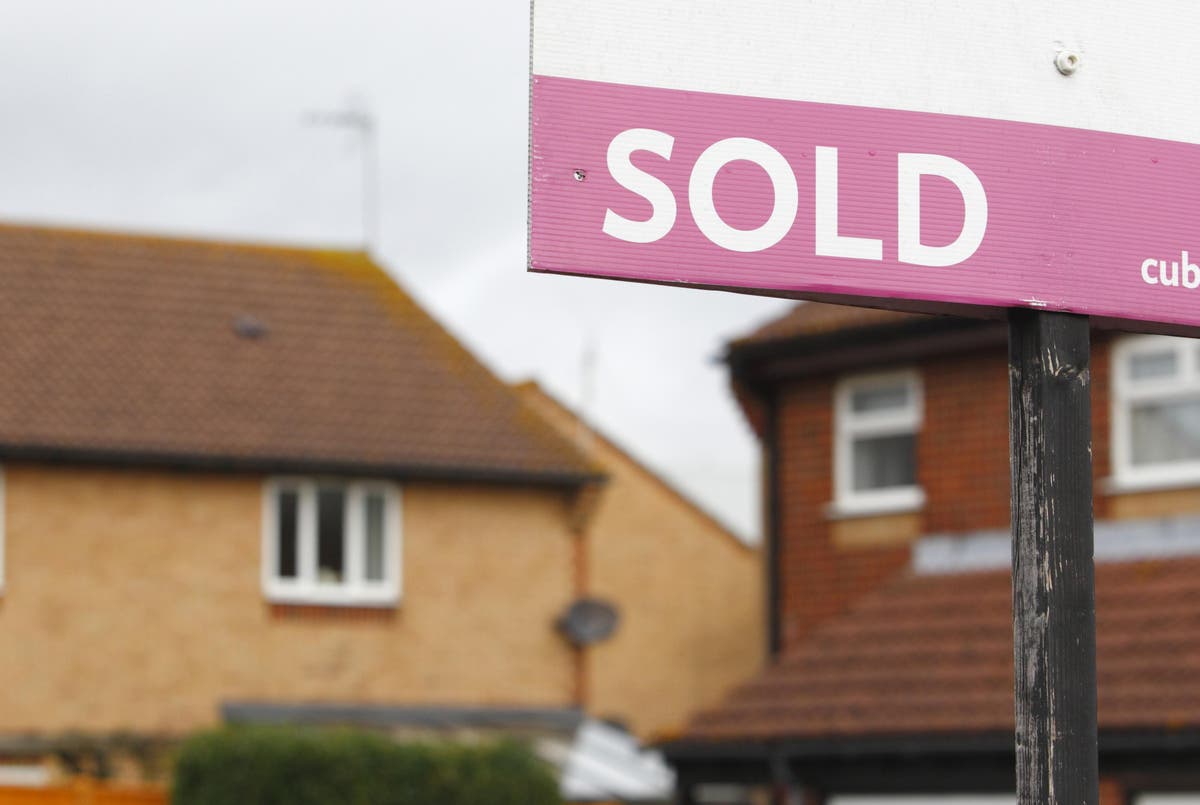 Where to buy dried flowers online 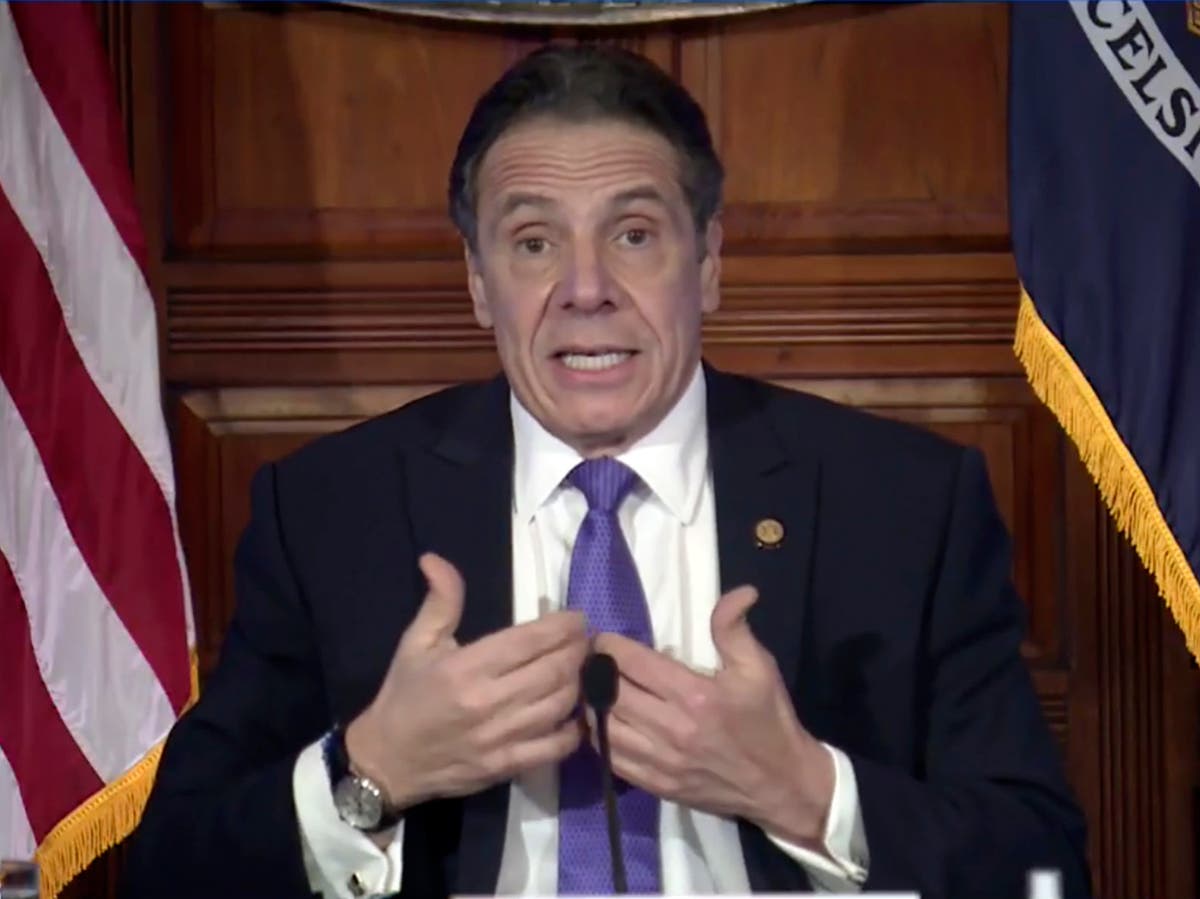