Boris Johnson opened up the shutters but it was just a crack, a chink, a cigarette paper-slim slit. May as well have kept them slammed shut for all the good it did.

Four more months. Another four months of pettifogging rules and restrictions. Our emergence from this year of hell will not so much be a dash but a maddening crab-like crawl to freedom.

The Prime Minister announced these disappointing plans to the nation at a later than usual Downing Street press conference.

Boldness, brazenness, boosterism. Those qualities for which we long associated Boris were all notably absent. Softly, softly was the order of the day. Even the way he entered the briefing room was slow and wearyingly sluggish. Plod, plod, plod. 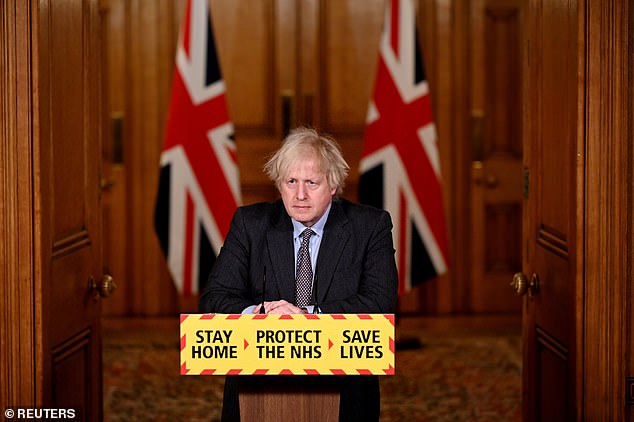 ‘Thank you for joining us,’ the PM growled. His voice was deep and gravelly, in need of a restorative lozenge. Sounded like he’d been shouting at someone. Matt Hancock, possibly. Or perhaps Dilyn the Dog had just chewed his way through another historical Number 10 artefact.

We heard how Boris’s four-stage plan would be strung out and staggered between now and the end of June. Little bit here, little bit there. He spoke to us the way a cautious teacher might address a bunch of first-year chemistry students. Goggles on, everyone, safety first. What had happened? The Boris of old would have had us all straight into the laboratory and blowing things up with the Bunsen burners pronto.

His face was etched with caution throughout, yanking his cheeks all the time as if to stay ‘steady on, careful now, go lightly.’ It was though the man was dogged with doubt. Frit. I blame those doom-monger scientists who’ve clearly got him on the run.

Speaking of whom, Chris Whitty and Sir Patrick Vallance were yesterday’s support act. Whitty’s head was so shiny it might have passed through a bowling ball polisher. He had his usual death charts to hand designed to keep us all suitably terrified, but was mainly irritated a journalist from the Guardian had incorrectly claimed he was against schools returning. You could see Whitty wasn’t comfortable at being cross. Suspect he’s is the sort of person who really has to gear himself up to complain when the waiter delivers the wrong order.

Boris had already announced his plans to the Commons earlier the afternoon. We started late as the PM had been dilly-dallying. One minute he was behind the Speaker’s chair giving members the thumbs up, the next he’d vanished. With over a hundred questions tabled for him to answer, it’s possible he’d made a precautionary dash to the bathroom. ‘Coo’mon Prime Minister, let’s gerron wi’ it!’ hollered Speaker Sir Lindsay Hoyle impatiently.

At dispatch box, the PM looked strangely happy to be back at work after recess. Probably relieved to get away from that wretched dog of his. The hair, however, remains a disaster zone. Lordy, what a mess! Small wonder there were such guffaws when Boris announced hairdressers (‘I’m glad to say’) would be allowed to begin wielding their scissors at the end of April.

He informed the House his plan was ‘cautious’ but at the same ‘irreversible’. He wanted it to be a ‘one way route to freedom’. He acknowledged a number of his colleagues were bound to feel he could go faster. From the opposite corner of the chamber there came a long, reedy croak of ‘here, here’. The culprit: mutton-chopped lockdown sceptic Sir Desmond Swayne, a wide grin appearing through his raffish, silken mouth covering . 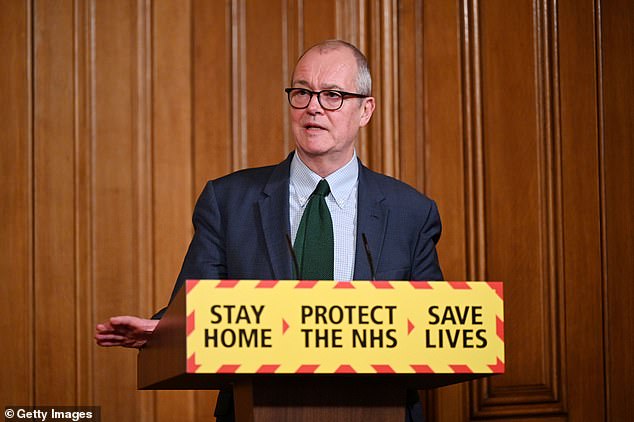 His face was etched with caution throughout, yanking his cheeks all the time as if to stay ‘steady on, careful now, go lightly.’ It was though the man was dogged with doubt. Frit. I blame those doom-monger scientists who’ve clearly got him on the run (pictured Sir Patrick Vallance) 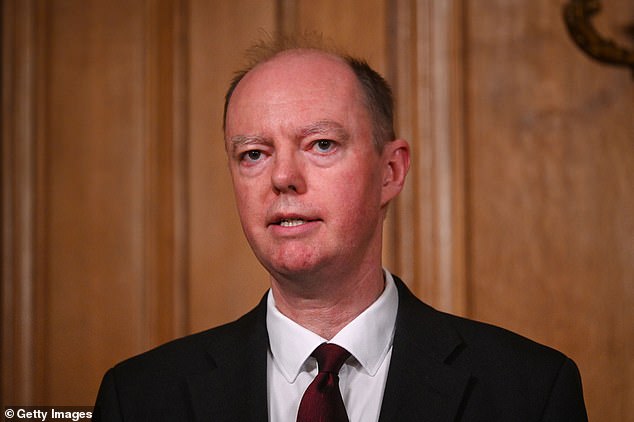 Chris Whitty (pictured) and Sir Patrick Vallance were yesterday’s support act. Whitty’s head was so shiny it might have passed through a bowling ball polisher

Opposite Boris perched Sir Keir Starmer, a study in tightly coiled frustration. The opposition leader has been in limbo since the success of the vaccine roll-out, and it showed. His legs were crossed, arms folded. His eyes flitted from side-to-side awkwardly. Reminded me of someone riding a night bus in a dinner jacket. He broadly supported the PM’s roadmap, though my mind drifted for much of the time he was on his feet. Like those tranquilliser darts used to capture wild animals, Sir Keir’s speeches have the potency to anaesthetise.

Boris thanked Starmer for his support, though added ‘bitter experience’ taught him it would most likely be withdrawn by next week. He then teased Sir Keir over his difficult ‘friends’ in the teaching unions and his support for the EU, who were making such a Horlicks of their vaccine roll-out.

Suddenly, an icy chill descended as the Speaker called Theresa May. She wanted the Government’s global travel task force report, due at the end of April, brought forward to help out the aviation industry. Boris denied the request but hailed his predecessor for being such a ‘doughty campaigner.’ Delightful. Imagine if Mrs T had patronised Ted Heath in such fashion? Poor Ted’s ruddy cheeks would have exploded.

There were frustrated voices from the Government’s benches over the PM’s caution but they were disappointingly tepid. Strongest words came from Mark Harper (Con, Forest of Dean) who wanted all restrictions removed by the end of April once the over-50s had been jabbed. Such a fastidious looking chap, Harper. Barely a crease on him. Even his mask appears to have been given a once-over with an iron.

The PM told Harper that a ‘significant minority’ would still not have received the vaccine by then. Oh, Boris you drip! Four more months of this hair-tearing, infuriating business it is then.