“Actually…” tweeted Trump’s niece Mary, reminding us all that he is indeed exactly that—someone’s crazy uncle.

At the risk of repetition, a couple days ago I took a look at Trump’s numbers with key voting blocs in the gold-standard NBC/Wall Street Journal poll—he is underperforming his 2016 levels in every single one of them.

First, Biden’s advantage over Trump among key groups in the survey compared to 2016 exit polls:

Then Trump’s advantage over Biden in certain blocs compared to 2016:

Overall, the NBC/WSJ poll had Joe Biden up by 11 points, and multiple aggregates have him at +10. The Economist has one of the most conservative polling composites with Biden up +8.6. But Biden’s campaign went to great lengths this week to discourage Democratic voters from thinking he has a double-digit advantage. In a virtual grassroots summit, campaign manager Jen O’Malley Dillon called the national public polling “inflated” and added, “We are not ahead by double digits.” What she didn’t say was exactly how not double-digity the Biden lead is.

Whatever Biden’s advantage, the campaign’s effort is clearly aimed stamping out any complacency that Democratic strategists are certain became the death knell for Hillary Clinton in 2016. But I must tell you, I think they’re reading the room wrong. As I wrote this week, a historic number of early Democratic voters are turning out at the polls and they are absolutely reveling in the chance to finally cast their vote against Trump. Although running up the score in early voting doesn’t necessarily translate to a win on Election Day, it certainly does suggest high levels of enthusiasm among Democratic voters.

What we can also gather without knowing the exact internal data is that Republicans are acting like losers. GOP Leader Mitch McConnell is all but ignoring Trump on the stimulus deal. Nebraska Sen. Ben Sasse, who didn’t have the guts or integrity to even hear witness testimony during Trump’s impeachment trial, suddenly wants to be on record making it crystal clear he thinks Trump is 100% unfit for office. Sounds like someone is burnishing his future presidential cred for a post-Trump GOP. Georgia Sen. David Perdue—who’s in a dogfight to save his seat—made the utterly desperate decision to not only introduce Trump at his Friday night rally in Macon, Georgia, but to butcher the name of Sen. Kamala Harris, with whom he has served fully three years in the U.S. Senate.

Make no mistake, that’s a racist dogwhistle from the same candidate who ran an ad this summer lengthening the nose of his Jewish Democratic opponent, Jon Ossoff. Perdue’s communications director tried to pass off the slight as a simple mistake, but that’s the work of a Republican senator clinging to his seat and concluding his best play is to make racist appeals to white voters.

And then there’s Trump himself, who devoted the bulk of his travel schedule this week to places he should have locked up by now, including Florida, North Carolina, Georgia and Iowa. If you want a window into how desperate Trump is, during his Florida pitch to seniors in Fort Myers on Friday, Trump expressed actual empathy.

“My heart breaks for every grieving family that has lost a precious loved one. I feel their anguish and I mourn their loss. I feel their pain,” Trump said. “There’s nothing to describe it.”

Naturally, that was on script. Trump read it, and it was very clearly modeled after Joe Biden’s empathic appeal to seniors in southern Florida earlier this week—ya know the one, where Trump later tweeted out a picture of a bunch of seniors in wheelchairs with the tagline, “Biden for President.”

In the Axios article, senior aides said Stepien’s path to victory counts on using Ohio, Florida, Georgia, Iowa, and Maine’s second district as Trump’s foundation. Stepien tells them winning those states is the “easy part.” Really? Not a single one of those states is a gimme in public polling and, in fact, Trump is polling roughly 4 points behind Biden in Florida—the biggest catch of them all with 29 electoral votes.

Just to give you an idea of how rocky that that electoral road is, consider this: Biden’s path to 270 starts with California and New York as its building blocks. And those states truly are “easy” ones.

And here’s the New York Times aggregates for each of those states, from worst to best for Trump:

None of this is to say Trump couldn’t win, it’s just a reality check on how unlikely he is to be victorious. And tons of voting is happening right now, while the polls continue to look very good for Biden. Conversely, if you’re Trump, the days are just slipping away. But the emphasis on early voting this year significantly lessens the chances that, for instance, the sitting FBI director could open a last-minute investigation into Biden that causes the bottom to fall out on his campaign.

So even as a haunting déjà vu feeling hangs over my excitement this year, I just keep looking at the fundamentals, how the campaigns are acting, and the actions of congressional lawmakers who are up for reelection or sharpening their knives for a post-Trump era. The outlook is good, much better in fact than it appeared in 2016.

And if anxiety is keeping you up at night, the very best antidote to that is taking action—doing has the medicinal benefit of occupying the mind so the hobgoblins of doubt can’t hijack it. Together, we can all bring this election home, and get back to the work of trying to build a more perfect union.

It’s the home stretch, and we need to put everything on the line. Sign up with 2020 Victory to make phone calls to battleground state voters for Joe Biden, Kamala Harris & a Democratic Senate. Phone call times are flexible, and you can also sign up for a training session if you are new to doing it.

Texas — yeah, TEXAS!! — is a swing state in this election, but for Joe Biden to win will require a tsunami of Democratic turnout. With Turnout2020, you can make phone calls to Texas voters every Tuesday & Thursday to help them get an absentee ballot.

Nervous about phone-banking? Calling voters in swing states to elect Joe Biden and the Democratic ticket is the most crucial thing you can do, but it can feel intimidating. That’s why 2020 Victory is holding a Call Crew Training to help you get started and get you on your feet comfortable to make a difference. Sign up for a Call Crew Training today.

Cancel Trump’s voter suppression by signing up to become a poll worker at a voting location in your area with Power the Polls.

We need your help to protect voters’ rights from the unprecedented threats they will face this year when trying to cast their ballot. Nonpartisan Election Protection volunteers like you will be voters’ first line of defense against restrictive election laws, coronavirus-related voting disruptions, or anything else that could silence their voices. Click to sign up today. 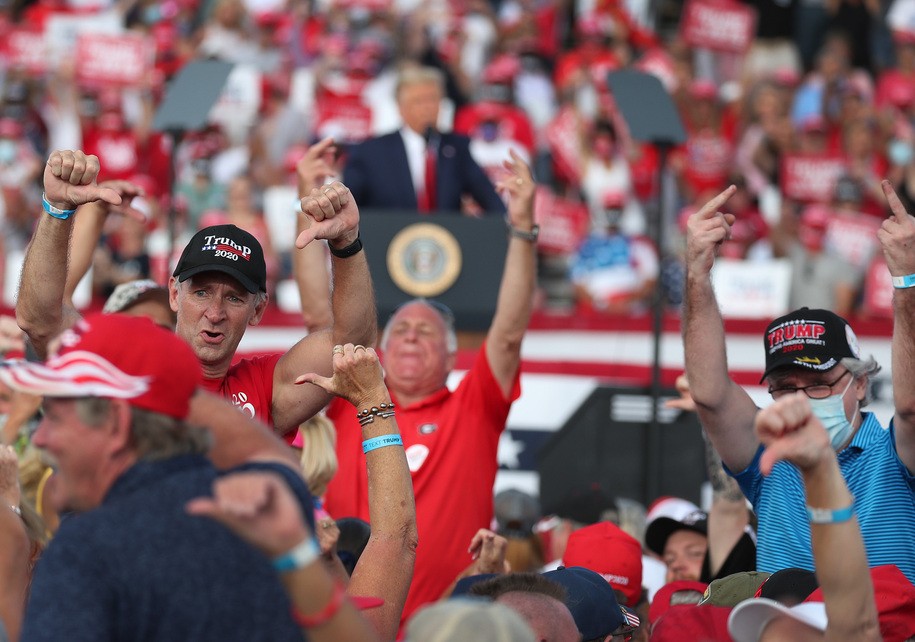 Donald Trump’s $200 bribe to seniors won’t make it for Election Day, and may be illegal