As the holiday weekend draws to a close, doctors and public health experts warn that coronavirus cases and hospitalizations will continue to rise before a vaccine is approved for emergency use authorization.

On Sunday, the US recorded 138,903 cases, according to data from Johns Hopkins University. It is less than the record 205,557 infections reported on Friday, but more than double the figure from just five weeks ago.

That makes 500,056 new infections since Thanksgiving.

It marks the 26th consecutive day that the nation has recorded more than 100,000 cases of COVID-19 with a seven-day rolling average of 162,000 – four times higher than the rolling average in early September.

Deaths have slightly leveled off with just 826 recorded on Thursday and 3,419 overall since Thursday.

Meanwhile, hospitalizations continue to never before seen highs, with 93,238 patients in the hospital with the disease, according to the COVID Tracking Project, marking the third time in four days hospitalizations have surpassed 90,000.

States in the Midwest and Great Plains are also struggling to control the pandemic, as cases, hospitalizations and deaths reached record-highs.

Minnesota’s director of infectious diseases said the state’s situation is ‘quite precarious’ while hospitalizations continue to climb Nebraska. In Indiana, where schools are struggling to stay open, there is a statewide teacher and substitute shortage as cases rise.

More than seven million Americans passed through US airports over the last week for Thanksgiving, including 1.18 million on Sunday, the highest number since mid-March. Overall, an estimated 50 million traveled.

This led Dr Deborah Birx to warn that any Americans who traveled over the Thanksgiving holiday should be tested for COVID-19 and assume they are infected. 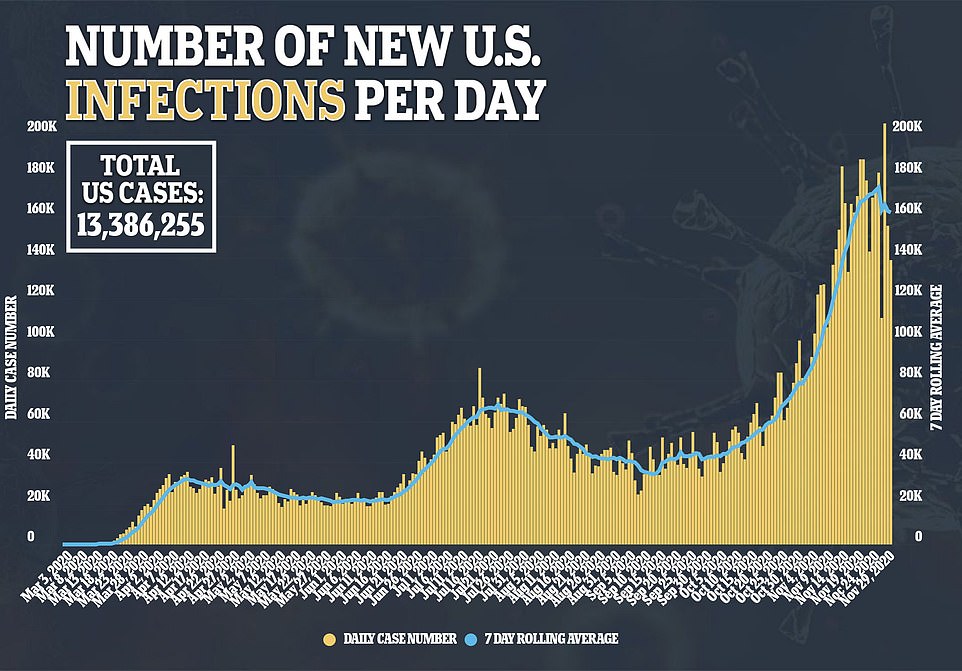 The US has recorded more than 500,000 coronavirus infections since Thanksgiving, with more than 138,000 alone reported on Sunday 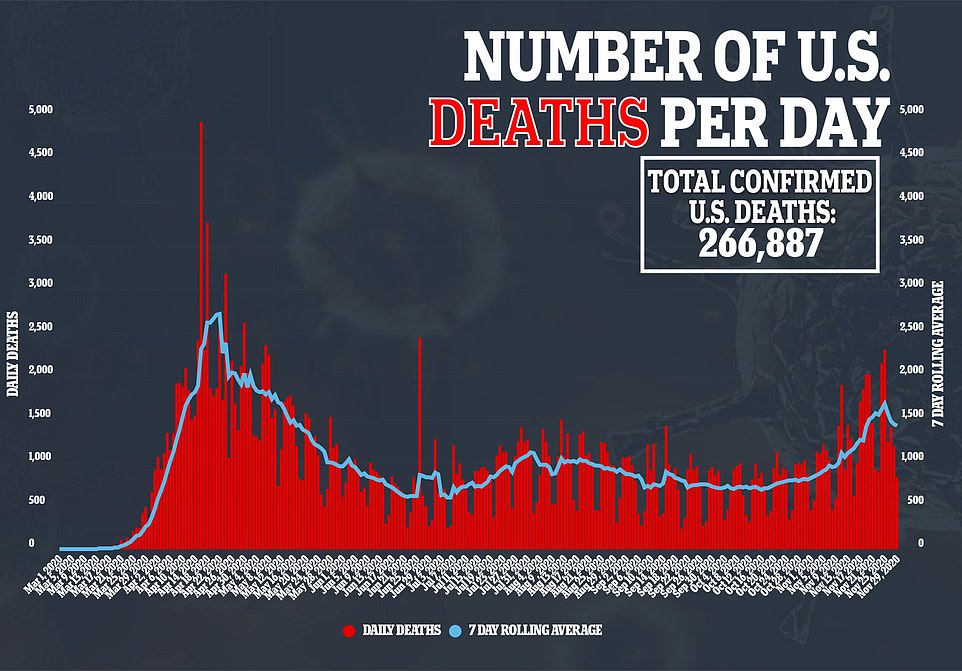 Just 826 deaths were reported on Sunday, the lowest in nearly a week, and 3,419 were recorded since Thursday (above) 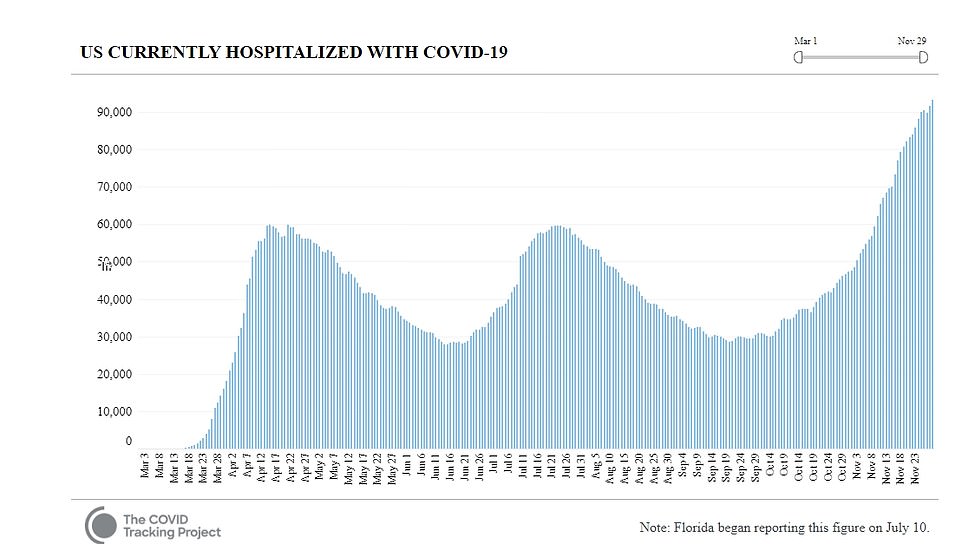 Hospitalizations reached a recored-high with more than 93,000 reported on Sunday, the third time in four days that the number of patients in hospitals has topped 90,000 (above) 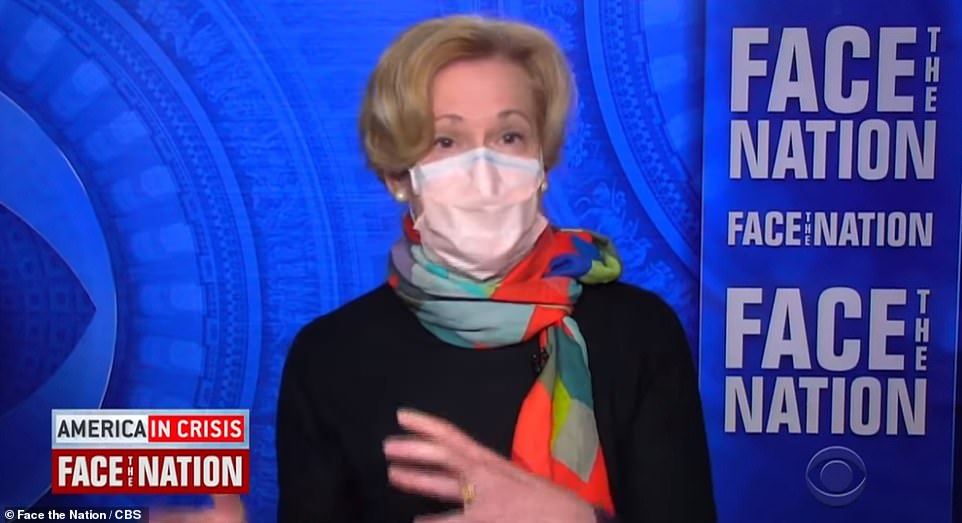 After seven million Americans traveled through airports over the last week, Dr Deborah Birx (above), the White House coronavirus task force coordinator, warned that anyone who traveled needs to get tested and until they receive a negative result should assume they are infected

On Sunday, the coordinator of the White House coronavirus task force, Dr Deborah Birx, said any Americans who  traveled over the Thanksgiving holiday should be tested for COVID-19.

It comes as the Transportation Security Administration said it screened 1.18 million airline passengers on Sunday, the highest number since mid-March but still about 60 percent lower than the comparable day last year.

‘So if you’re young and you gathered, you need to be tested about five to 10 days later. But you need to assume that you’re infected and not go near your grandparents and aunts and others without a mask,’ she said on CBS’ Face the Nation.

‘And if you’re over 65 or you have comorbidities and you gathered at Thanksgiving – if you develop any symptoms, you need to be tested immediately.’

An estimated 50 million people were expected to travel over the holiday period, ac

Birx added that she and other members of the task force are concerned that post-Thanksgiving surges will resemble the spikes in cases seen after Memorial Day weekend.

‘We’re entering this post-Thanksgiving surge with three, four and 10 times as much disease across the country [as we did on Memorial Day weekend,’ she said.

‘We saw what happened post Memorial Day. Now we are deeply worried about what could happen post-Thanksgiving because the number of cases, 25,000 versus 180,000 a day, that’s where- that’s why we are deeply concerned.’

At the same time, Dr Anthony Fauci, the director of the National Institute of Allergy and Infectious Diseases, warned that the public will have to celebrate Christmas and New Year’s with small gatherings.

‘If the surge takes a turn of continuing to go up and you have the sustained greater than 100,000 infections a day and 1,300 deaths per day and the count keeps going up and up,’ he told USA Today.

‘I don’t see it being any different during the Christmas and New Year’s holidays than during Thanksgiving.’

Meanwhile, former FDA Commissioner Dr Scott Gottlieb said that with soaring cases, one-third of the country may be infected by year’s end.

‘We’re gonna probably have by the end of this year 30 precent of the US population infected,’ he said.

‘[If] you combine a lot of infection around the country with vaccinating 20 percent of the population you’re getting to levels where this virus is not going to circulate as readily,’

Minnesota recorded more than 100,000 new infections over two weeks and, in the last week, 320 fatalities – the second-highest weekly total ever

In Ohio, infections have spiked by nearly 20% over the last week and positivity test rates have risen from 12.8% to 15.1%

In Nebraska, 931 COVID-19 patients were being treated in hospitals as of Friday, which  is more than double the figure from one month ago

Cases are spiking in states across the country including the Midwest and the Southern Great Plains.

In Minnesota, officials recorded over a two-week period more than 100,000 new infections and more than 700 deaths. Over the last week, 320 fatalities were recorded – the second-highest weekly total ever.

‘Our status is quite precarious.’

While in-person dining in restaurants and bars may help reduce the spread of the virus, experts say that gatherings over Thanksgiving could lead to a spike.

‘I think Thanksgiving and then building into the Christmas holiday season could see increased cases,’ Dr Michael Osterholm, director of the Center for Infectious Disease Research and Policy at the University of Minnesota, told the newspaper.

On the other hand, if people begin to take this much more seriously – and, as I say, they stop swapping air – then we could see cases level off and start to come down.’

In nearby Ohio, infections have spiked by nearly 20 percent over the last week.

Additionally, the test positivity rate was 15.1 percent in the last week, in comparison with 12.8 percent the prior week, according to an analysis from USA Today.

What’s more, many of the rates in Ohio’s rural counties are growing at the same pace as, or worse than, urban counties. 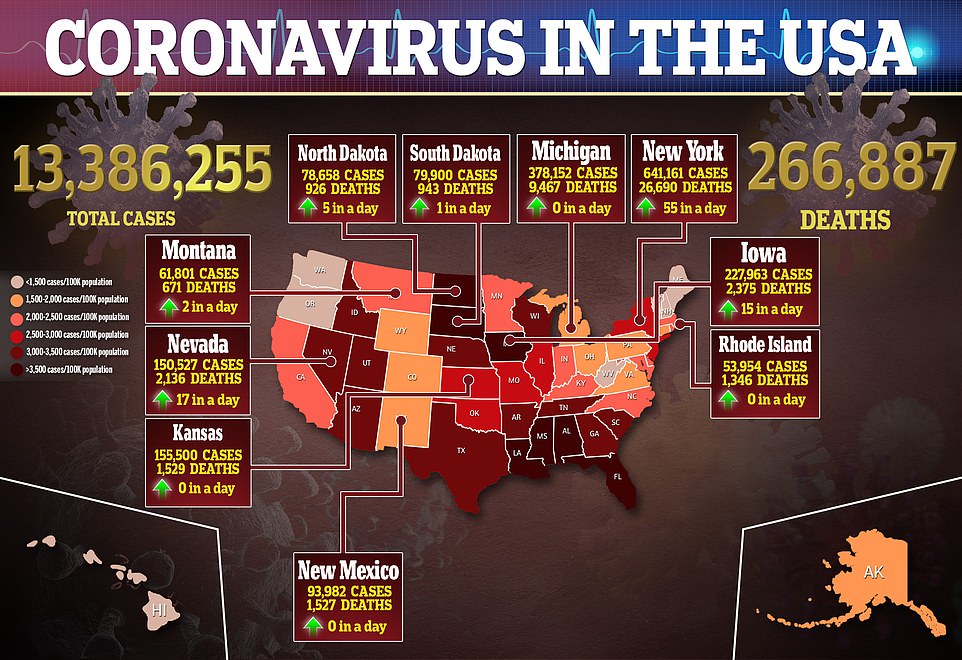 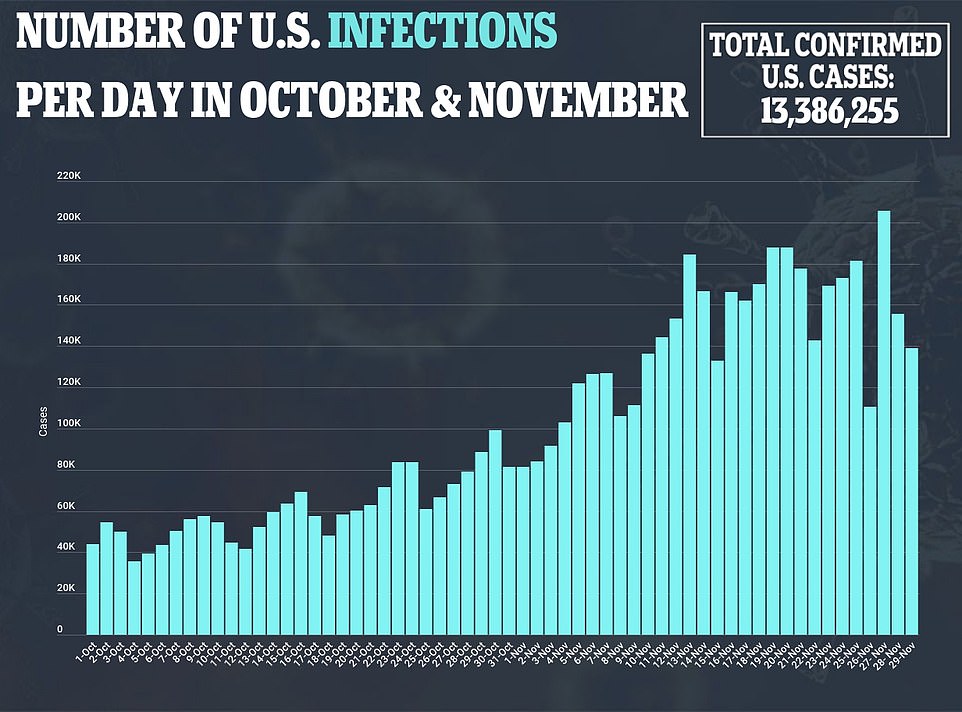 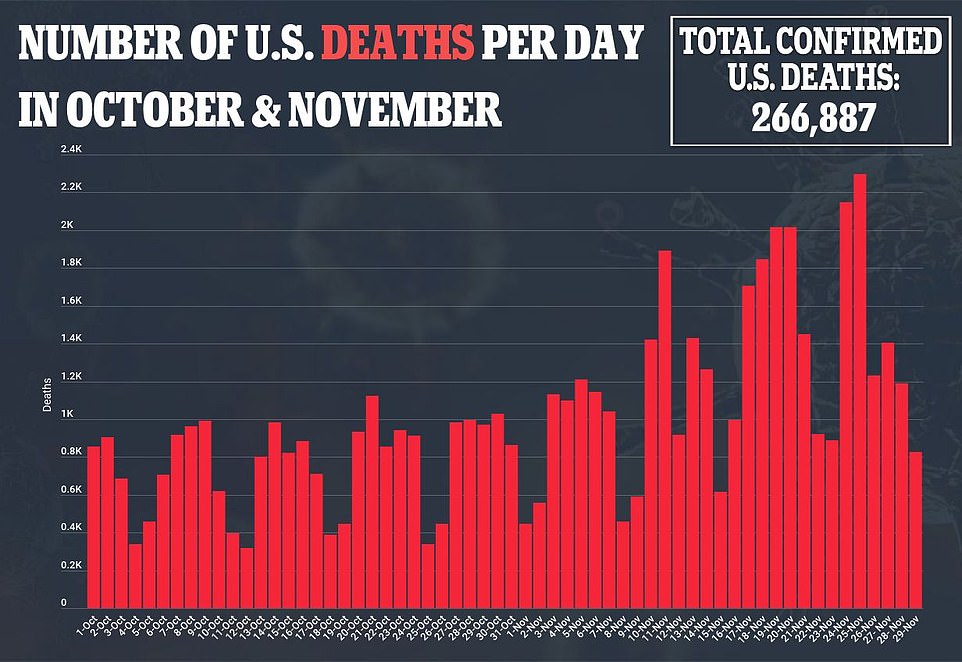 ‘When you look at the CDC’s classification of high incidence, we are nine-fold that,’ William Hablitzel, health commissioner of Adams County, a rural county that borders Kentucky, told The Columbus Dispatch.

‘When you are 50 to 100 percent greater than some of the larger urban counties where you would anticipate this kind of spread, it’s shifted how people are thinking about this.’

The pandemic is also hitting the Great Plains hard, particularly Kansas and Nebraska.

In Nebraska, 931 COVID-19 patients were being treated in hospitals as of Friday, reported the Omaha World-Herald. That’s more than double the figure from one month ago.

‘What people need to understand is this is going to take a while to percolate through the population,’. ‘So, we’re going to be seeing the spike in cases probably by the middle of December.’

Experts predict that the post-holiday surge in COVD-19 cases and deaths will be the worst yet.

‘We just have so much more COVID-19 in our community right now compared to previous holidays.” 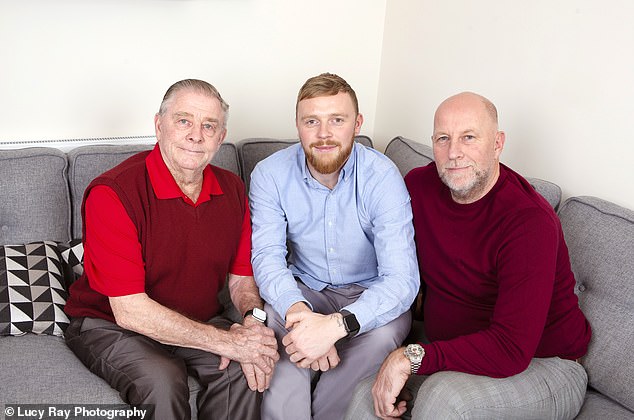 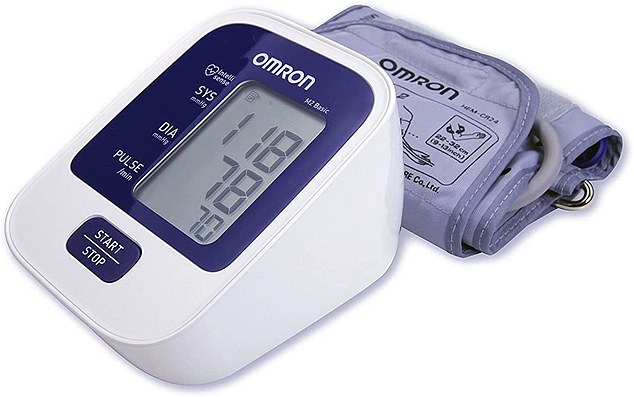 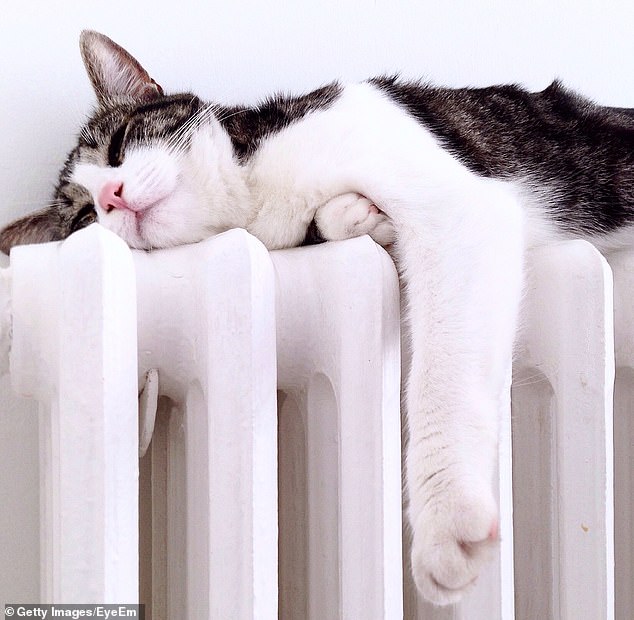 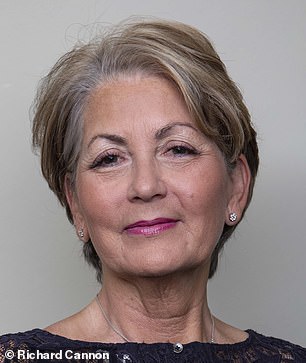