Two years ago at the UN Appeals Tribunal in New York a Brazilian labour judge was struggling to hold her own. Martha Halfeld Furtado de Mendonça Schmidt, the jurist, says she felt stressed, hamstrung by her stilted English in an anglophone environment. “It was as if there was a glass window,” she recalls. One through which she could see, but not speak.

So in 2019 she enrolled at Beet, a family-run language school in Bournemouth on Britain’s south coast. Judge Halfeld has since become president of the tribunal. She says the coaching she received from her teachers, in classes and on country bike rides, helped her become “talkative” in English, and sensitive to its nuances. The distinction between “glance and glimpse — the one voluntary, the other involuntary — can make all the difference to a judgment,” she says.

Judge Halfeld is one of 550,000 annual visitors, ranging from schoolchildren on a first trip abroad to mature professionals, who come to the UK to learn English. English UK, an association representing more than 400 English language teaching (ELT) centres, estimates that language students contribute about £1.4bn a year to the UK’s economy. The cash comes from tuition fees, spending in towns, cafés and bars and money paid to local families by students in return for bed, board and conversation practice. Or rather it did until March 2020, when the pandemic grounded international travellers and prompted ELT centres to follow schools in suspending face-to-face teaching.

Now, after a year in which their revenues have fallen by more than 80 per cent, ELT centres face the prospect of another season disrupted by border restrictions and travel bans, while their debts pile up. For many schools, the start of 2021 “feels like Groundhog Day”, says Jodie Gray, chief executive of English UK. Classed as offices for the purpose of paying business rates yet in many instances told by councils that, as educational establishments, they do not qualify for business rates relief, ELT centres say they have been denied a lifeline thrown to leisure and hospitality businesses. Neither ordered to close nor told they can remain open, many have also missed out on grants directed at businesses instructed to shut during national and local lockdowns. “We have fallen through the cracks,” says Gray.

“Desperate” is how Tom Borrie, principal of St Giles London Central, describes the mood among language schools. Like many centres, his school was refused the 2020/21 rates holiday awarded to retail, leisure and hospitality businesses as part of the government’s response to the pandemic. Consequently, it must somehow find £330,000, to pay its rates bills, although its revenues have been decimated. In a statement, Camden Council said that “English language schools do not meet the eligibility criteria set out by the government” in guidance “which local authorities are required to follow.” Yet other schools within the St Giles Group, in Brighton, Eastbourne and Cambridge have received relief, as have schools in some other local authorities. In a statement for the FT, a government spokesperson said: “It is for councils to determine whether individual properties are eligible for the relief.”

Val Hennessy has been refused business rates relief for International House Bristol, a language school she founded in 1987. To keep her creditors at bay, she is tendering for contracts to teach overseas language students remotely. But, “the prices people will pay for online classes are below what they pay for face-to-face teaching,” she says, and the market is dominated by low-cost providers operating from countries such as the Philippines. To survive online, UK schools may have to contract work out to remote teachers in low-wage economies and, if the furlough scheme ends before international travel resumes in earnest, make their existing UK-based teachers redundant.

It is not only jobs that would disappear if English language schools go under, but opportunities to “forge life-long connections”, according to Patricia Yates, director of VisitBritain. Also at stake is a decades-old tradition of foreign teenagers coming to learn English and returning to study at UK universities. “For me it’s a lot easier to deal with a company from the UK than anywhere else,” says Koray Ozkaplan, a Turkish ship broker who spent a year at the Wimbledon School of English in the 1990s, and went on to study for professional qualifications in London and play football in an amateur league. Now based in Istanbul, he visits London regularly and has bought into a UK shipping company. “Though I can use my English to talk to Canadian and US firms, with the UK it’s a different connection,” he says.

For Marie-Louise Cook, a homestay host in Bristol, the collapse of language schools would mean the loss of an income that finances her and her youngest son Oliver, who has Down’s syndrome, to remain in their house, now his older siblings have moved away. “Sharing meals, showing the best of British, really, it’s a way of reaching out. We can live too much in our bubbles,” she says.

The damage done by Covid-19 comes on top of existing concerns about the UK sector’s ability to fend off competition from Canada and Australia and sustain its lead as the most popular destination for EU students to learn English. From October 2021, EU citizens will no longer be able to travel to the UK on ID cards. This has raised fears that exchange trip operators in Italy and Spain, where travelling on ID is common, may decide to send under-18s to Ireland or Malta, to spare parents the expense of buying passports. 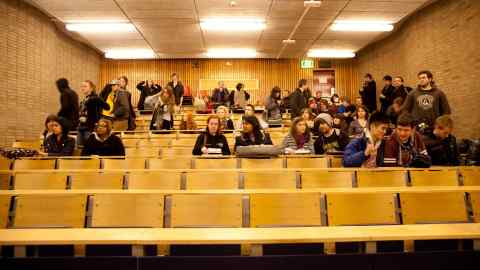 On the upside, “the UK is still an aspirational destination”, says Andrew Mangion, chief executive of Malta-based EC English Language Centres, which has schools in all the main countries where English is taught.

Yet, without targeted support, the worry is that by the time international travel recovers many well-known schools will have folded, and relationships built over generations with overseas schools and agents will be lost.

Hauke Tallon, chief executive of the London School of English, says: “For the home of the English language to be hammered in this way is unbelievable.”

More than 50 UK ELT centres have closed permanently since the pandemic began. To prevent further losses, English UK is pressing the government to stipulate that language schools are eligible for business rates relief. It is also calling for an extension of the furlough scheme until autumn 2021, and an assurance that language schools will be included in support directed at tourism. Unlike hoteliers and tourist venues, the schools argue that they have no home market to turn to, as domestic tourists have no need for English courses.

To remove a barrier, English UK is also lobbying to give students on accredited language courses the right to work up to 20 hours a week. This would restore a right that the Home Office removed a decade ago, bringing the UK into line with Australia and Ireland. “Goodwill is crucial,” says Jane Dancaster, managing director of the Wimbledon School of English. “If people come here, are welcomed and enjoy their experience, it opens doors. They become friends for life.”

Judge Halfeld agrees. When she flew home she left behind, in her landlady’s care, a bike and two suitcases filled with warm winter clothes and a downpayment at Beet for further classes. “They are frozen there,” she says. “Waiting for me to come back.”

Weekly Covid cases drop by another 30%